Last Friday (15th June) marked the successful end of 5-year effort by WEN and many others to make it safe for pedestrians to cross at the Lido Junction. The lights now have an all-red stop phase to allow safe crossing in all directions.

West Ealing Neighbours and its partners the Five Roads Forum and Kingsdown Residents Assn thank everyone involved in Lido Junction Project Group and many others for campaigning for, negotiating for and finally implementing a safe crossing at this notorious junction. Thanks to the Council and TfL for their hard work to reach agreement on this and we now hope everyone will feel confident that they can at last cross this junction safely.

A man has been shot dead and a woman seriously injured in a shooting in Felix Road, West Ealing this afternoon. A police helicopter was seen circling overhead shortly after.

More news as we get it

Man of 32 was shot dead and a woman in her late 20s has been taken to hospital after a shooting in a flat in Felix Road. The flat looks to be in Glenpark Court, the new block built on the dog-leg corner, where Felix and Alexandria Roads meet and oppposite St John’s School.

A Felix Road resident says of the afternoon’s events ‘Lots of police and ambulances including the Air Ambulance. Police came door-to-door asking whether we have seen anything suspicious. Police conducting searches in front gardens and have also brought a police sniffer dog. Lots of media interest including the Sky helicopter which took some aerial shots and then left. Have had calls from Daily Mirror and 2 from Daily Mail asking whether we knew what was happening. Some coverage on LBC who had a live reporter in Felix Road.’

It’s not clear if the police are looking for anyone in connection with the shooting.

A man has been charged with the murder of Dothan Gordon and the attempted murder of a woman.

As part of its fundraising for the move to new premises in West Ealing this summer OPEN Ealing presents its second comedy night this Friday at 8pm with:

Writer of Spats on BBC Radio 7. Time Out says ‘constantly inventive and playfully mischevious … a talent to watch’.

‘Fantastic newcomer with a surrealist bent’. 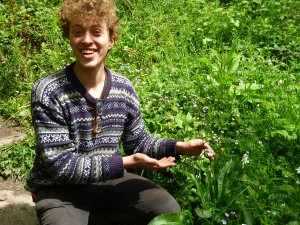 Wild Garlic Mustard, mild Linden leaves, wild spinaches and elderflowers await you by the side of the Brent in Pitshanger Park. Ealing is overflowing with free, healthy, delicious food. It’s wild and free, not in the sense of Woodstock but rather of glittering salads full of exciting new flavours. Local transition town supporter and expert forager Sam Sender will lead a wild food walk in Pitshanger Park on Sunday 17th at 2pm. Meet at the tennis courts, and bring baskets and bags.

Check out their blog at http://ealingtransitioncommunitygarden.wordpress.com/, and refer to the Upcoming Events tab for dig day dates.

I went to the Drayton Court last night for the Eel Daddy organised music night. Oddly enough, it was the first time I’ve been there and it’s a good venue. It must hold about 200 maximum and it was pretty full last night. There were three bands playing. Du Bellows and Blushing Bones are local and the headliners were Simon Townshend’s band.  For my taste, Du Bellows were the best of the three. Their Welsh lead singer Jade has a memorable and powerful voice which works really well on their bluesy numbers. She teamed up with guitarist T J after an an open mic night at Ealing and have developed their own style. Take a listen to Jade’s voice  http://www.youtube.com/watch?v=QBcxGB8KR88  I think she’s a bit special.  And don’t overlook Blushing Bones. I don’t think the sound balance was right for them last night as Tessa Shrubsall’s voice got a bit lost but they too are well worth a listen http://www.myspace.com/blushingbones and great credit to Tessa and Blushing Bones for organising the night. Let’s hope the Drayton Court can build its reputation as a music venue.

If you vote, Ealing might get a spruce-up for the Olympics…

We seem to have more votes already than all other boroughs – is that because we’re dirtier?

Team Ariel (Ariel detergent and stain remover) are putting up £10,000 to help spruce up five boroughs in time for the Olympics.

Please vote by following the link below

(Thanks to Denise Davies for passing this on…)

I’ve booked my ticket to see Simon Townshend play at Eel Daddy’s gig on Friday at the Drayton Court. (Unusual name Eel Daddy but I think there’s a reference back to Eel Pie Island which was a big jazz and blues venue in the 60s). I’m curious to see Simon Townshend play. He’s the younger brother of The Who’s Pete Townshend and Simon has played with The Who and has a good track record in his own right. The event is organised by local group Blushing Bones who are well worth a listen as well – saw them at OPEN Ealing a while back. Should be a good night. More details – http://www.facebook.com/events/222263417884216/

Then next Friday (15th) a Fundraising comedy night at OPEN Ealing.  I’d better declare an interest as I’m involved with OPEN but take a look at the website for details – www.openealing.com Tickets £5 or £3 for students.

How was it for you? The Five Roads street party kept calm and carried on (yesterday afternoon – yes, the worst weather of the whole weekend). (Thanks fiddler Sophie for the pix.) 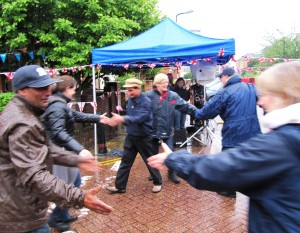 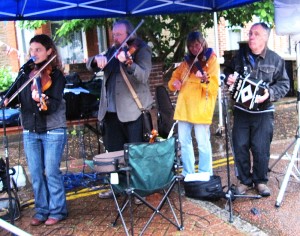 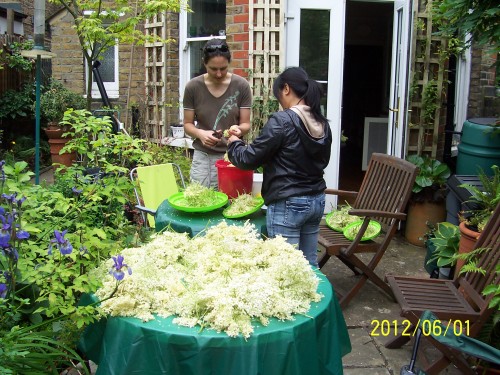 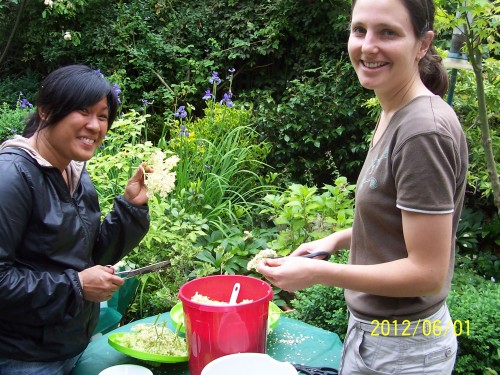 I’ve been lucky enough to go to two live music events in Ealing in the last 24 hours and I’ve really enjoyed both. Last night I was at the Ealing Club to see the Creole Brothers play their version of Louisiana Creole music. The Ealing Club has a key place in the history of British Blues Music and these twice monthly music nights are beginning to reestablish the club as an important part of Ealing’s cultural scene.

Back to the music. If you’ve been to the club you’ll know it’s tucked away down the steps by an estate agent opposite Ealing Broadway station.   As we walked down the steps to the entrance I could hear the sound of Cajun music.  It was a great sound to hear and got even better when we went inside.  Sitting in a circle were musicians of all ages thoroughly enjoying playing their music. Their joy spread to everyone listening and before long people were up and dancing.

The main event of the evening was the Creole Brothers. Without realising it we happened to be sitting near them as they waited their turn to play. One played the accordion and the other a fiddle. Cajun music has a powerful driving rhythm that soon has your feet tapping and the singing in French seems to fit the rhythms so well.  A great night out.

This lunchtime at OPEN we had the soaring voice and very skilled cello playing of Laura Victoria. Laura should have been joined by Sarah-Jane Miller but Sarah was ill so Laura played solo. At first the cello seemed an odd choice of instrument to accompany her modern take on folk music but it worked beautifully. Her voice is so expressive and soars and dips, delighting the audience. Laura’s hour long set included many of her own songs interspersed with at least one jazz classic. Whether singing unaccompanied or making the cello fill the air with multiple sounds, Laura was compulsive listening. I thoroughly recommend you give her a listen –    www.lauravictoriamusic.com