This year the festival is in Blondin Park and has everything from live music and a dog show (maybe not at the same time) to a host of stalls, food and entertainment for all. It’s free to get in and should be a great day out. More details here. 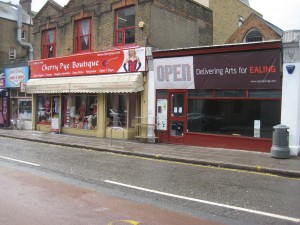 Royal Wedding, a brand new play by Ealing-based writer Wally Sewell,  imagines the chance encounter between the privately-educated artistic director of the centre and his brash, more worldly neighbour.   Described as a  light-hearted romp, the play sees sex shop owner Queen Bee step through the newly-created “entrance” to engage artist Tarquin Pritchard-Smith in a bout of combative wordplay, raising issues such as class, snobbery,and the place of the artist in wider society. It’s directed by Ealing-based Anthony Shrubsall and  stars Francesca Wilde and Michael Murray.

OPEN Ealing is a local arts initiative originally set up in 2010.  Performances of Royal Wedding will take place at  OPENShop 13 Drayton Green Road, W13 0NG, at the following times:

The performance will last one hour approx., and there will be an opportunity for discussion with the players, writer and directorafter each performance. The play is not suitable for children.

This is a play written by Murray Shelmerdine and sponsored by West Ealing Centre Neighbourhood Forum. It is about quality of life in West Ealing dating back to the first records of ‘modern’ human settlement here in the 13th Century. We hope the songs, facts and humour are to your liking and that you will come along and join in.

Its world premiere is on Thursday 5th September at St John’s Church in Mattock Lane at 7.30pm. Entry free.

It’s then on at The Drayton Court on Thursday 12th September and Tuesday 17th September at The Forester in Leighton Road. Both performances are at 7.30pm and entry is free. 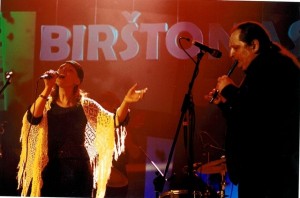 Not what you might expect for a folk evening! OPEN Ealing present an acoustic evening with Lithuanian singer June on Saturday 17th August at 7.30pm.

Having grown up in a part of Southern Lithuania, Dzūkija, where traditional singing is still very much a part of daily life, June likes to sing authentic old Lithuanian folk songs. From a very young age, she has taken part in Lithuanian national youth contests. She has sung with one of Lithuania’s most famous folk bands,”Vydraga”, and has recorded a number of songs and instrumental music with this band for Lithuanian national TV and radio.

June treats the old authentic folk music of other countries with love and respect and incorporates the ideas into her musical vocabulary. She was able to express many of her ideas with the A.Klova folk-jazz quintet. She collaborated in a project with the Senegalese master percussionist Pierre Kouyate. The famous jazz musician Vladimir Chekasin was fascinated by June’s voice and invited her to participate in his world music project at the “Mama Jazz” international festival.

At the request of the organizers, June represented Lithuania at the contest”Country Europe’ before the “Piknik Country” festival at Mrągowo in Poland. After performing in both the contest and the festival, she was invited to perform at Warsaw’s principal country music clubs and at festivals in Germany and Poland. She was highly praised by the noted Polish country music critic, Ewa Dabrowska. 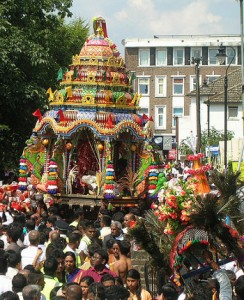 The weekend of 10/11th  August sees the annual Shri Kanagathurkkai Amman Temple (SKAT) festival come to West Ealing once again. Past festivals have attracted thousands of devotees to West Ealing from all over the world. The festival culminates on Sunday with the Chariot procession leaving the Temple around 9am, and then returning at about 12pm via Mattock Lane, Culmington Road, and the Uxbridge Road.

Dean Gardens will be full of stalls with Tamil food, lassi drinks, and selling bric-a-brac to fundraise for the Temple’s activities. It’s a great day out for everyone with lots of amazing sights, sounds and tastes. 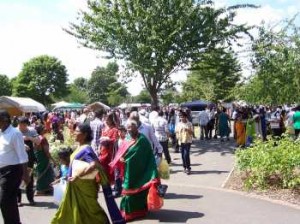 A bit of light reading for the summer holidays – the last of three articles by local historian David Shailes on the origins of some West Ealing street names:

‘The Wood family owned a large estate in Ealing and the family’s ancestral home was Culmington Manor, Craven Arms, Shropshire, hence Culmington Road. The family are more associated with roads in other parts of Ealing W3/W5: Aston, Boileau, Corfton, Craven, Hamilton, Madeley, Woodville, Woodfield, Woodgrange all take their names from places or people associated with this family. Broughton Road in W13 also fits in to the above group.

Elers Road in Northfields takes it name from the Elers Family that owned some land here in Victorian times, but did not live in Ealing. They gave land  to the local board so that an entrance  on to Northfield Avenue to Lammas Park could be built. Nearby Carew Road is also linked with the family.

Robinson Close is built on the site of the old Robinson Nursery which survived until the 60’s as the writer remembers the development of the site.

Not too far away are Amherst Road & Gardens, which are named after Charles Thomas Amherst (1832 – 1909), a jeweller and owner of Castlebar House from 1871.

The only link that at the moment I have found for Argyle Road relates to John Campbell Duke of Argyll who owned Ealing Grove from 1775 until 1791: a house near Grove Road in Ealing Broadway described as a mansion house with 64 acres of land.  An alternative explanation is that the developer used a Scottish theme as nearby is Sutherland Road.

Close by is Egerton Gardens for which there are two possible explanations: the 1st Earl of Ellesmere in Shropshire – Francis Egerton (1800 to 1857) or the Bishop of Durham a Dr John Egerton (1721 to 1787) who owned Elm Grove a house near Ealing Common. This latter house was owned by Spencer Perceval (1762 to 1812) who is the only British Prime minister to be assassinated. Ealing Council offices in the Uxbridge Road are named after him.

Montague Road is likely to be named after Sir Montagu Sharpe  – 1856 to 1942. Whilst he lived at Hanwell Park in Hanwell he had a greater involvement with Brentford than Ealing. He was a significant individual involved with the Middlesex County Council, which before the London Borough’s were created in 1964, was the County Council responsible for Ealing.

Since starting writing these articles a very chance discovery following a conversation with a relative who happened to mention that she had recently read a book about a Lord Ellesmere saw a cursory internet search reveal a possible explanation for the naming of the road I live in – Erlesmere Gardens. There are a few other Erlesmere street names throughout the UK, but no place name with such a spelling. Nearby are Walmer & Balmoral gardens, which were built at the same time, by the same developer and could be named after castles.

It now looks like it is from a fictional story called “Erlesmere: or, Contrasts of Character” by LS Lavenu first published in 1856. Erlesmere is a village that features in the book.

The two previous articles are: I saw this first time round at OPEN Ealing and thorougly enjoyed it. The performance starts with a reading of Conan Doyle’s The Adventure of the Creeping Man and then moves on to Wally Sewell’s specially written drama, The Adventure of the Crying Boy, exploring the relationship between Holmes and Watson. (I still love watching the TV repeats of Jeremy Brett playing Sherlock Holmes. He perfectly captured the edginess of Holmes.)  Anyway, well worth £5 in my view.

The Adventure of the Crying Boy by Wally Sewell in ‘Evenings and afternoons of Sherlock Holmes’ performed by Peter Saracen and Edmund Dehn, directed by Anthony Shrubsall.

Wally Sewell says, “As a writer I’ve always been interested in the mythical and the symbolic, and the concept of the unconscious, with its population of monsters swimming in its dark depths has been a constant draw. Representations of it, usually in the form of forests and wild places, are something of a recurring motif in my writing! My first exposure to Sherlock Holmes was having the Hound of the Baskervilles read to me as a school boy. At that stage what caught my imagination more than Holmes’spowers of deduction, was Conan Doyle’s evocation of the moors, haunted by malign spirits and bogs that could swallow up ponies, all observable from the relative civility of Baskerville Hall. I’ve tried to catch something of that spirit in my play.”

His play concerns an impromptu late night meeting between Sherlock Holmes and Doctor Watson, who is now married and largely absent from Holmes’s life. As their conversation progresses, touching on Holmes’s cocaine addiction, his dalliance with Freud and confessions from childhood, demons pull themselves up through the cracks in the floorboards and out onto the stage.

The play has been well received at its various performances around the fringe, winning praise from members of the Sherlock Holmes Society and at least one professional psychiatrist!

Performed here with a reading of the short story The Adventure of the Creeping Man, the show promises to be an intriguing and engaging evening or afternoon’s entertainment.

NB Not suitable for children.

More details about this and other OPEN Ealing events here.