The planning application for the BHS site (104-110 Broadway) has been submitted.  As you’d expect it’s a long and detailed document with a lot of technical information which needs careful study.

At first glance the essential details seem to be:

You can find the full details on the Council’s website and comments need to be in by 1st January 2016. 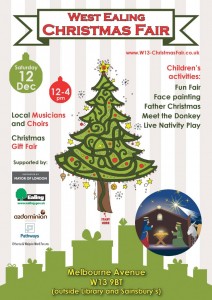 Christmas comes to the heart of West Ealing on Saturday 12th December when the annual Christmas Fair takes place in Melbourne Avenue, right in the centre of West Ealing between the library and Sainsbury’s.
Highlights
The spirit of Christmas is captured with the return of the much-loved Charlie the donkey who will be touring the streets from 11am before leading the nativity players in the Fair’s finale. Especially for children there will be face painting, funfair rides and, of course, Father Christmas handing out gifts.
Musicians
We have a wide range of musicians and singers performing including the Ealing Rock Choir, Capital Chorus along with a choir from St Johns and St James churches plus The Mermaids and local favourite Robert Hokum.
Craft Market
The Christmas Fair also offers everyone the chance to buy locally made Christmas gifts ranging from cakes, confectionery, apple juice & chutneys to jewellery, skincare & fragrances, cards and many other gifts.
For more information: www.w13-christmasfair.co.uk

Tfl has a consulation running for some much-needed changes to the E8 bus route.  The E8 currently runs from Ealing Broadway to Brentford bus depot.  For a variety of reasons, such as increased demand for public transport to West Middlesex Hospital, the proposed new route is from Ealing Broadway to Hounslow taking in the hospital.  All the buses would become double-deckers if this change goes through.

Changes to local bus routes was proposed by WEN some back in 2009 and the need for a direct route to the West Middlesex Hospital was a key factor.  We would still like to see a bus route that crosses north-south over the Lido Junction to link the new Crossrail station at West Ealing with Northfields station and beyond.  Nevertheless, we welcome this proposal and if anyone wants to read more about the E8 and other proposed bus route changes or comment on them the link is here. 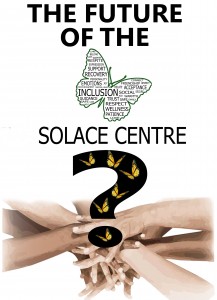 Well done to everyone involved in helping secure the future of West Ealing’s Solace mental health drop-in centre.  At one point the centre was under threat of being closed altogether as part of the Council’s budget cuts (story here). However, last week’s decision by the Council to keep the centre running at its current level is to be applauded and well done to everyone involved  – users, staff, carers, councillors, council officials, and the local community.  The Council’s plan is to redevelop the site tucked away at the end of Bowman’s Close. The Solace Centre will be rebuilt to a design the users are happy with and then add three new flats for Marron House which is a mental health residential unit.  Work will start next summer at a cost of £640,000.

This is a great news for all the centre’s users and it recognises that mental health services are an essential part of a caring society.

Not for the first time police raids on off licences in West Ealing have found non-duty paid alcohol.  In raids on off licences in both West Ealing and Northolt over 2,000 litres of beer or lager were seized along with over 400 bottles of wine were seized. I’d like to think this will lead to licences being taken away from the offending stores, especially if this was not their first time, but I doubt it will happen.

The full story is on Ealing Today

I caught a piece on the TV news this morning about the declining number of live music venues in London. Ealing has a great tradition in live music, especially rock and rhythm and blues through the Ealing Club in the 1960s. It’s brilliant news that the team involved in today’s Ealing Club have got Arts Council funding to put on live music on the last Saturday ot the month. This month’s event is at The Drapers Arms and includes Azadeh who should have been on at the SoundBite Festival in September (which we had to cancel due to an assault in Dean Gardens)) so you can grab your chance to see her for free on 31st October along with Ramon Goose and some other good acts. Full details on the Ealing Club website 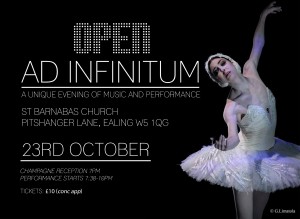 OPEN is delighted to announce a gala performance featuring the wealth of local talent with whom we have worked during the year. Performers include actor Mary Drake; harpist and vocalist Sheila Moylan; The Vaudevillians; Frankie and Freddy and prima ballerina Bridgett Zehr.

Tickets cost £10 per adult (concessions apply) and can be reserved on line or by emailing info@openealing.com

Maybe it’s my imagination but I’m sure that in the last few weeks I’ve seen and heard more parakeets about than ever.  It feels like West Ealing used to be at the edges of their empire and now we’re well and truly being colonised.  I’ve seen and heard them for some years but never have I seen them in our pear tree on Northfields allotments. Now I have and you can bet that they will have chomped their way through the pears at the top of the tree.  Also, in the last couple of weeks, the WEN Abundance volunteers have been picking apples off local trees and, again, the half eaten fruit off the high branches is a sure sign of parakeets.  I don’t think there’s anything we can do to deter them from eating the fruit.  I’ll just have to hope they leave enough for us earth-bound humans.

Advice Plus is a new ‘drop in’ advice service open to residents who live in Ealing and more specifically in the West Ealing area.

• Training and employment
• Money advice on debts, benefits and managing finances.
• How to switch energy provider and save money on your monthly bills.
• Housing- general queries
• Health and wellbeing- tips on how to live a healthier lifestyle including support on mental health.

Our next session is on the 1st October between 1-4pm and is at Green Man Lane Café.

The operation will see officers tackling these issues through targeting hotspots such as Dean Gardens and areas surrounding West Ealing Broadway having listened to the concerns of West Ealing residents and hearing the detrimental impact these issues have been having on the local community.

The teams have already made significant progress on the initiative. Over the weekend of September 19th and 20th, officers from the Walpole SNT arrested two men for racially aggravated public order offences who had been drinking heavily in the Dean Gardens. Elthorne SNT officers arrested one man for affray following an alcohol fuelled fight on Uxbridge Road in the early hours of Friday morning and one man for begging, who was found to be in possession of more than £250 in cash. Two men were given cannabis warnings.

462 litres of non duty paid beer and lager was seized from three premises in the West Ealing Broadway area on September 22nd after officers from the Met Police’s Licensing Team conducted a planned series of visits to off-licenses. Licenced premises found to be trading in an irresponsible manner risk having their premises licences revoked by a licensing authority sub-committee.

The operation will initially run from the 18th September through to December and will then be reviewed to consider extending the initiative. This follows a successful campaign by Safer Neighbourhoods Teams in Greenford, Northolt and Perivale, which saw a significant reduction in levels of street drinking and associated street crime.

Officers would like your support by reporting any street drinkers congregating and causing any Anti Social Behaviour to the Safer Neighbourhoods Team by email at Walpole.SNT@met.police.uk, titling your email Operation Bottletop.

The neighbourhood teams will not only be taking a firm line against ASB they will also be gathering evidence to support a ‘Public Spaces Protection Order’ (PSPO) in West Ealing. Officers are keen to gather impact statements from those affected by street drinking in the area. People wishing to give impact statements are encouraged to email Walpole.SNT@met.police.uk