It sometimes feels that West Ealing is caught in a ‘perfect storm’ of reasons to attract street drinkers. West Ealing is home to Ealing Magistrates Court in Green Man Lane, the Probation Service in Leeland Road, RISE (drug and alcohol recovery service) in St James Ave and, at least what was, a  24-hour off licence at International Broadway. Finally, near all of these is Dean Gardens which offers a very accessible venue for street drinkers with excellent public transport links. The situation with International Broadway may have changed for the better as it has now got a new name, Istanbul Gate, and no longer appears to sell alcohol. International  Broadway lost its licence at a recent review but appealed and the appeal hearing was due to be heard in August. How this now stands with the change of name and withdrawal of alcohol is not yet clear.

END_OF_DOCUMENT_TOKEN_TO_BE_REPLACED 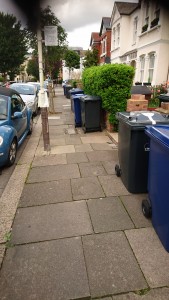 Our next bin collection in the Walpole ward is tomorrow morning and it’s blue bin time this week. However, I took this photo in Westfield Rd this morning and it’s clear there is still confusion with both black and blue bins out in the street.  I just hope it all settles down soon.

Like many other areas West Ealing has seen an increase in fly-tipping over the last few weeks. I’ve reported two fly-tips to the Council this morning which makes about five in the past couple of weeks. The increase in fly-tipping and the haphazard street cleaning are making our streets look a mess.  As far as I can tell, what street cleaning there is going on is just litter picking.  I’ve seen attempts to use road sweeping machines to clean heavily parked up streets, needless to say, to no effect. I’ve seen no sign of anyone actually sweeping the streets and the gutters to clean away all the leaves and other rubbish that will soon be blocking the drains in this rainy June.

I don’t know what the Council’s plan is to keep the borough tidy during the change of rubbish collecting system but what should have been built in to their plan is a special contingency to allow for the vans that go round collecting and cleaning up reported fly-tips to patrol our streets and look for fly-tips themselves as well as react to ones reported by residents. There were always bound to be teething problems but it feels like these are being left to residents to sort out rather than the Council being proactive.  Maybe I’m wrong. I hope so. 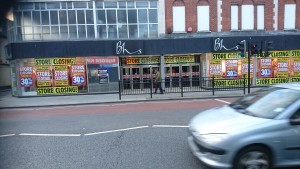 It was due to have closed this spring for redevelopment but had a stay of execution as the developer put their plans on hold. Now, however, the failed sale of BHS to Dominic Chappell has caught up with the store and the closing down sale signs are up. It’s a shame for shoppers and staff and, in some way, the end of an era when West Ealing had many of the large multiples – M&S, WH Smith, Mothercare and more. BHS is the last to go. Let’s hope ths ite isn’t left undeveloped for too long as BHS going leaves a big gap on the high street. 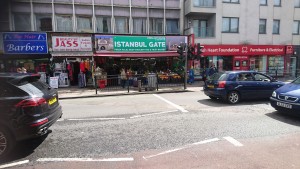 If you live in West Ealing you’ll very probably know that the supermarket Broadway International used to have a 24-hour alcohol licence. Earlier in the year the licence was reviewed by the Council following detailed work by the police highlighting a range of problems associated with this store. West Ealing Neighbours and other residents’ groups gave evidence outlining the many alcohol-fuelled problems caused to residents, shops and traders by anti-soical behaviour in and around Dean Gardens and Melbourne Ave. As a result of the review the Council revoked Broadway International’s licence. However, the store appealed and was continuing to sell alcohol until the appeal was due to be heard in August.  Now though the store has a new name, Istanbul Gate, has dropped its appeal and no longer sells alcohol. From what I hear this has already made a difference and the level of late night disturbances and anti-social behaviour appears to have dropped. I sincerely hope this is true and local residents get undisturbed nights from now on. I also wish Istanbul Gate good luck with their alcohol-free iniative and really hope it’s a success for them.

This article by Smriti Gopal is from our latest newsletter:

Street drinking, homelessness and vulnerable people in and around Dean Gardens and the rest of West Ealing are a cause for concern to the local community.  Meanwhile, nearby, the Ealing Soup Kitchen and St. John’s Church, both, on Mattock Lane have been and still currently provide support to the vulnerable people in hope that at least some of these people will be encouraged to have a better lifestyle.

Mcleay elaborated on street drinking, homeless and vulnerable people and the support offered by the Ealing Soup Kitchen for this community.  He told us that approximately 80% of their clients do drink.  Sometimes the reason for street drinking is homelessness and their adverse circumstances.  If the homeless don’t have a social network and are mixing with others with similar circumstances, they are likely to get into a habit of consuming alcohol excessively.  A significant number of these people hang out in Dean Gardens.  So Ealing Soup Kitchen has also set up an Ealing Evening Hub from 7-9pm on Mondays to encourage street drinkers to give up drinking and get involved in more positive activities here, where they are not allowed to drink alcohol.

In addition to helping vulnerable people getting off the streets, Ealing Soup Kitchen also works with some of the associations and organisations to support these people.  Mcleay said: “We work with an association called, Recovery & Intervention Service Ealing (RISE).  RISE provide a lot of intervention and recovery to people who are suffering from being addicted to alcohol.  RISE comes to the Ealing Soup Kitchen and helps these people with all that they are going through.  We also want to help to sort out people’s situations and try to improve their lifestyle both holistically and physically.”

Some of these vulnerable people feel very open to talk about their situations while others may not like to reveal.  These people might feel afraid to disclose their circumstances.  Mcleay revealed what impact, the Ealing Soup Kitchen has had on vulnerable people who have been supported.  He said: “There are a significant number of success stories that we have had.  One of these vulnerable people is, Alan Simpson who is our trustee.  Simpson was our client for four years.  He was living on the streets.  We managed to get him housed in a property in South Ealing.  As a result of his thankfulness Simpson came on board and he networked with us.  He’s one of the rarest homeless people I’ve met, in the sense that he drinks in moderation.  Simpson feels he doesn’t need to have an alcoholic drink or get involved in drugs.  He smokes.  It’s rare to be on the streets for so long and not have a mental health problem, drinking problem or drug problem.  These are the three things one can be prone to while living on the streets.  Living on the streets can be a toxic lifestyle, sometimes.”  One of the reasons why some of these new initiatives have been set up is to try to improve the lifestyle of vulnerable people, the local residential area and surrounding areas in West Ealing.