Dean Gardens sees the return of the West Ealing SoundBite Festival on Saturday 10th September – a free food and music festival celebrating the rich diversity of the area.

END_OF_DOCUMENT_TOKEN_TO_BE_REPLACED

Clamping down on street crime

The Walpole and Elthorne Ward police teams have jointly launched a new coordinated operation with the support of additional specialist officers drawn from across the Borough.  The aim is to tackle prolific crimes including street drinking, drug dealing and general Anti-Social Behaviour (ASB).  We will be targeting hotspot areas such as Dean Gardens and West Ealing Broadway.  There will be a specific emphasis on tackling street drinkers in public areas, as local residents have identified this type of ASB as being their major concern because it has a detrimental impact on the whole local community.  Officers will particularly enforce the Controlled Drinking Zone dispersal powers.

Already, the first two days have been very active with Operation Sparta, our visible policing support team, conducting 20 stops on our most prolific street drinkers and dispersing them from the area.  The uniformed team are supported by a specialist plain clothes team and together they have arrested a man in Dean Gardens for being drunk and disorderly and failing to comply with a dispersal order, and two people for possession with intent to supply class A drugs on Leeland Terrace.

This operation runs in conjunction with Operation Freyja on Elthorne which has been targeting active drug dealing in Chignell Place.  Operation Freyja has been active for the last five months and produced some good results including a multi-agency raid with the Council and ongoing plain clothes proactive work leading to 36 arrests and the closure of a ‘drug factory’.

Officers can be contacted on a dedicated mobile phone (07824 529679) or via our office number 020 8721 2949 which gives you a direct link to Police Officers to contact them and report any street drinkers congregating or causing any Anti-Social Behaviour.  There is also an answerphone facility if officers are busy dealing with incidents or the 101 number; alternatively we can be contacted by our email at walpole.snt@met.police.uk.

The neighbourhood teams will not only be taking a firm line against ASB, they will also be gathering evidence to support a ‘Public Spaces Protection Order’ (PSPO) in West Ealing which when granted will provide Police Officers a number of powers to deal more robustly with street drinkers.  Powers include confiscation of alcohol, dispersal of groups and banning ‘legal highs’ as well as restrictions on the use of playground equipment in Dean Gardens by adults.

The Police and Ealing Council’s Safer Communities Team have been working together to tackle anti-social outdoor drinking across the Borough and to identify and tackle problem areas, individuals and premises.  Police Officers have been joined by outreach workers from RISE, Ealing Council’s commissioned drug and alcohol intervention service.  Recently Walpole SNT in partnership with the Council have been successful in obtaining a premises closure order on Kirkfield Close as a result of resident reports of active drug dealing.  Similarly, as a result of building and providing evidence against the Broadway International shop, we have achieved the revocation of their 24 hour off-licence.  This should make a significant difference to the occurrence of ASB in the Walpole and Elthorne areas.

Please remember:  you can always contact the Police on 101 for Non-Emergency calls.  In an Emergency always dial 999.

A New Plan for Ealing Broadway

Both West Ealing and Ealing Broadway have neighbourhood forum plans nearing completion. These plans, if accepted by the Council, residents and businesses, will influence the development of these two town centres for 10 and more years to come. So they matter. The closing date for comments on the West Ealing plan  is 5th October. Information about the Ealing Broadway plan is below:

A ground breaking new plan for Ealing Broadway has been sent to the Council by the Central Ealing Neighbourhood Forum.

The plan will influence development in the centre over the next ten years. It shows how Central Ealing can respond to the opportunities and threats of Crossrail.

CENF is the first business neighbourhood in London to submit a Plan under the Localism Act. It has been created by a partnership of local residents, businesses and community organisations.

It believes Ealing should be a distinctive and welcoming place for people to shop, work, study or just visit. It should be the natural focus for the wider area, based on the special character of its buildings and green spaces, and be a regional centre of excellence for culture and education.

The Forum wants everyone to get engaged . The plan details can also be seen here.

Ealing Council now has to arrange for a formal consultation on the Plan and for an independent Examiner to assess it. It will then be put to separate referendums of local residents and businesses, and if both groups vote in favour it will become part of Ealing’s official local plan. 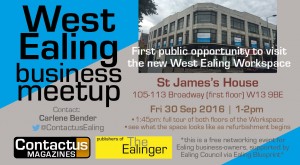 Keen to have an early look at the future home of the West Ealing Co-Workspace Hub?

Come along to the first event being held in the future home of the shared workspace – and after 45 minutes of business networking and one-minute pitch presentations, we’ll go on a tour of the two-floor facility.

See what the building looks like now, visualise how you could use the space and take this opportunity to get involved and give some feedback.

This is a free event for SMEs, being run by ContactUs and supported by Ealing Council. Registration is required and places are limited.

The first Ealing Art Trail is running this coming weekend. There are over 130 artists in their own houses, studios and workshops to see. Full details of all the venues are on the BEAT website

There has been a range of problems round our streets following on from the introduction of the new bins. Like other parts of the borough we seem to have had an increase in fly-tipping and our fair share of bin problems. WEN has been actively involved in trying to help deal with these problems. I seem to have filled out umpteen Council ‘report it’ forms for fly-tipping. I have also been in touch with the Walpole councillors to help with some of the houses of multiple-occupation where there have been problems with bins. I hope residents feel that bit by bit the situation is improving and our thanks to our councillors for their help. We all know there is much more to be done to get our streets back to being clean and tidy but they are determined to get it done and we as residents we can keep doing our bit by reporting fly-tips and other similar problems at https://www.ealing.gov.uk/homepage/182/do_it_online . 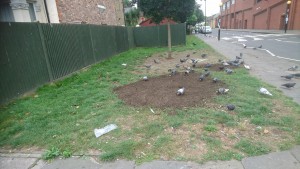 One particular problem area has been the patch of grass near Sainsbury’s on Melbourne Avenue and Leeland Terrace. It has become a fly-tipping hotspot with black bags and other rubbish dumped there almost every day. On top of this people throwing bread for the birds has made it a pigeon magnet and, in turn, the pigeons have wrecked the grass. The Council has now removed the rubbish bin and seat from the area and are looking at complete make-over for it, perhaps taking up the grass and putting in rose beds. 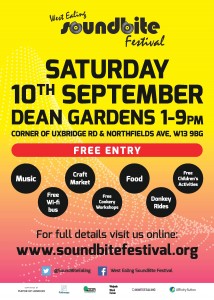 The weather forecast looks good for the return of the West Ealing SoundBite Festival to Dean Gardens on Saturday.  SoundBite is a free food and music festival for all the family celebrating the rich diversity of the area.

Donkey rides, face-painting, funfair rides, games, Giant Lego and children’s cookery are just some of the activities on offer for younger children whilst a climbing wall, shoot-out football, along with the free wi-fi bus are part of our whole new activity area for teenagers.

On the food front, West Ealing’s Hilltop Roti bring their delicious Caribbean wraps, The Forester pub bring their popular BBQ food and, for the first time, visitors can get a taste of some Somali favourite dishes. Tom’s back with his ice cream van and top quality coffee will be available throughout the day. To tempt visitors to our craft tent we have local honey, apple juice and some hand-made local gifts.

Lastly, remember to visit our community stalls and have your say about how you would like to see Dean Gardens be developed for the community.

Full details can be found at www.soundbitefestival.org

Proposals are being worked on to build new homes at the Mattock Lane end of the Northfields allotments. The allotments are owned by local charity Pathways. It also owns Dean Court which is accommodation for older people on the other side of Northfield Avenue. Pathways would like to redevelop Dean Court to increase the amount and quality of housing for older people. Their aim is to provide a total of approximately 110 Pathways social homes and 30 homes for sale across the whole development.

Part of their plan is to take about 10% of the allotment site, at the north end, and build 18 new social homes and four homes for sale.  These homes wil be in two buildings, one five to six storeys high and the other three to four storeys.These homes would be built first in order to move existing residents of Dean Court in to these homes whilst Dean Court is redeveloped. Residents can then return to their new homes in about two years.

These proposals are likely to prove controversial as the arguments about the urgent need for more housing are set alongside the role and value put on green space in an ever increasingly built up area.  These plans are at a very early stage and Pathways are now starting a lengthy period of consultation with the local community.  More information about the plans and how to ask questions and make comments are available on Pathways’ website .

(I should add that I have an allotment on the Northfields site but my intention with this post is to put information in the public domain. There is another occasion for a close look at these proposals and the different points of view within our community.)