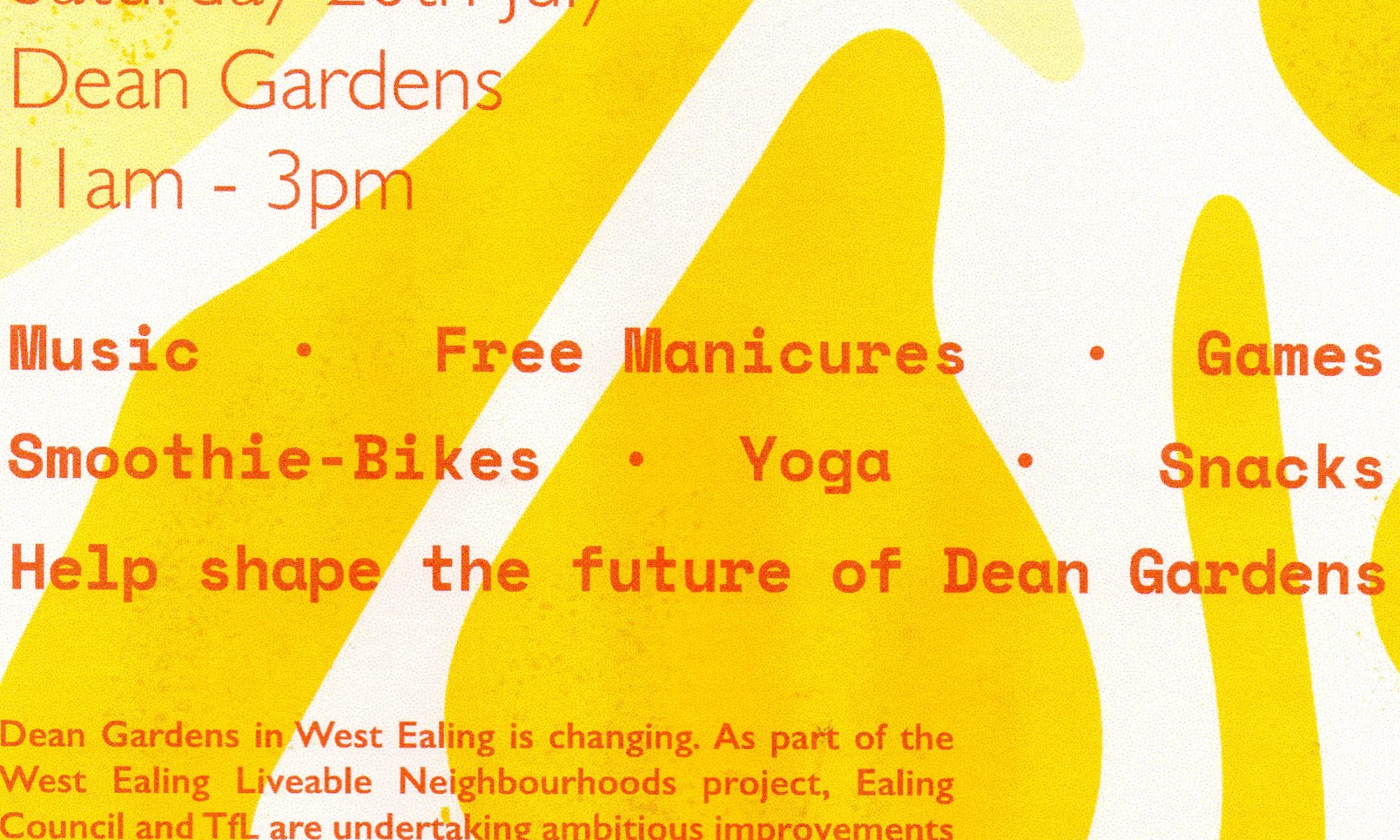 Enjoy a range of fun activities for all the family including games, smoothie bikes, yoga, music and more ….and give your views on how to make the park a safer, greener and more enjoyable space.

The campaign to save seven of Ealing’s libraries from possible closure continues this Saturday with a march from Hanwell Library to West Ealing Library.

Join us outside Hanwell Library in Cherington Road at 10.30am. This is almost our last chance to show the Council that we oppose their plans to make these seven libraries, including West Ealing, community managed or close them down.

This is to give formal notice that the Annual General Meeting of West Ealing Neighbours will be held on Wednesday 10th July at the Welshore Community Hub, 99 Broadway (next to the old Bensons for Beds shop on corner with St James Ave) starting at 7.30pm.

Topics for the meeting will include:

In addition to the above, there will be a short report on our activities in 2018 and on our finances followed by elections for the following named posts:

All of the above posts can be held either singly or jointly. If jointly, two members, can between them, organise how the responsibilities of that post are to be carried out.

In addition, there is a minimum of two and a maximum of 12 members’ posts available for election to the Management Committee.  Some of the areas where we welcome help include:

The campaign continues to save the seven libraries under threat of closure. Tuesday night, the night of the Council’s cabinet meeting, the campaign reached the Town Hall steps and will continue…

The 26-storey tower with 149 homes is called by the developers ‘the UK’s tallest fully-affordable tower’. The developers are Southern Grove and Thames Valley Metropolitan Housing (TVMH) who are also the team developing So Resi the 136 homes building on the old BHS site in West Ealing.

The development will replace the row of shops by the station and go into Manor Road. What exactly constitutes affordable in West Ealing is open to debate. Nevertheless, the 149 homes will be split between 65% shared ownership and 35% rented at the London Living Rent – a new scheme from the London Mayor which sets rents at a third of average local earnings. Other criteria include a maximum gross joint income of £60,000 for those wanting to buy through shared ownership.

There’s no question West Ealing needs more homes, especially ones that are affordable by local people. The concerns expressed by many local residents on the newly set up Facebook page about both towers centre on the height and appropriateness for this area.

There is a public exhibition of these plans on Monday 24th and Tuesday 25th June downstairs at the Drayton Court Hotel 3-8pm. There is a website for this development

Supporters of the ‘Save Ealing Libraries’ campaign will be gathering outside the Town Hall this coming Tuesday 11 June from 6pm. There is a meeting of the full Council that evening at 7pm. The Council will not allow the petitions to save Ealing’s libraries to be presented at the meeting. Please come along beforehand to show them your support for the continued funding of West Ealing, Hanwell, Northfields, Perivale, Pitshanger, Greenford and Wood End libraries. 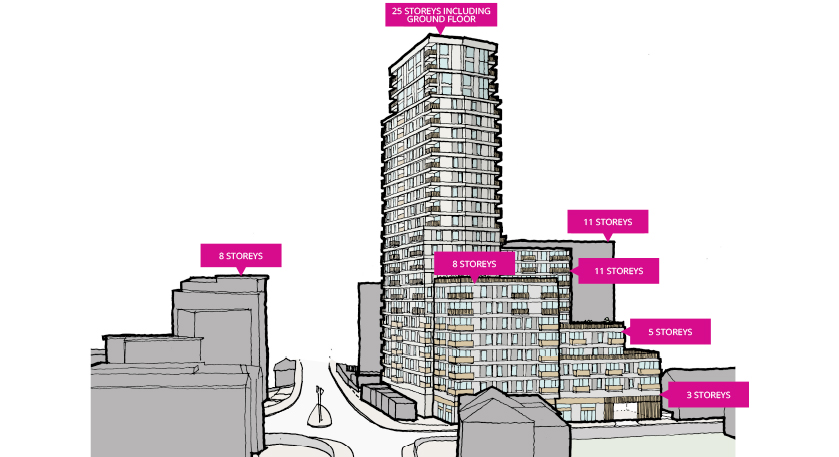 Our Facebook page was very busy indeed with reaction to A2Dominion’s exhibition this week about its plans for a 25-storey tower block on the Majestic Wine and Halfords site opposite West Ealing station.

The common thread was undoubtedly that 25 storeys is just too tall and out of keeping with what is primarily a residential area. A2Dominion’s plan is to build about 183 homes on this site. Of the 183 homes 35% will be affordable and of these 60% will be affordable rent and 40% shared ownership. The full plans can be found here. The closing date for comments is 3rd June. Sometime after that A2Dominion will put in a formal planning proposal when there will be another chance to comment.

However, we should not see this development in isolation. This area around West Ealing station is certain to see a lot more development. The question for the local community is what sort of new community would we like to see created as a result of the inevitable development and how do we go about trying to influence the development process? What seems to be happening is a rapid increase in the height of planned and proposed developments. We started with the original eight storeys at Green Man Lane, then very recently the Council approved 15-storeys for A2Dominion’s plans for the old Woolworths site. Now, A2Dominion are back asking for 25-storeys.

Undoubtedly, we need more homes but at what price and for whom? Are these developments really tackling our housing shortage when many are marketed in the Far East as investment properties?

At present the tallest buldings in this area are the 8-storey Luminosity Court next to the station and the 11-storey Dominion  House, also an A2Dominion building, next to the Drayton Court Hotel. We have four specific objections:

A2Dominion’s consultation is open until 3rd June and you can see their plans and give your comments on their special website.

A new Facebook page has been set up by local residents opposed to this 25-storey tower.

There is a pre-march meeting taking place on Wednesday 22nd May at Greenford Community Centre (170 Oldfield Lane South UB6 9JS) where we will be able to meet each other and prepare banners and placards. Children are welcome.

For details of how to support the campaign and local actions, email: saveourseven.ealing@gmail.com

Route of the March:

Set off from Greenford Hall at 11.30am, down Greenford Road towards the A40. Turn left into Cowgate Lane before Greenford roundabout and then left again up Oldfield Lane South past the park and the library, returning to Greenford Hall.

The council is proposing to cut funding for seven out of 13 libraries in the borough. It has  put forward the idea of Community Managed Libraries (CML).  In the CML model the community charity organisation is responsible for the financing, operation and staffing of the library.  If no charity groups come forward with an appropriate proposal the relevant libraries will close.

This funding cut comes despite Ealing Council’s recognition of the importance of local libraries for local school children on its own website:

Other boroughs are seeking different ways to implement savings rather than lose a valuable resource used by so many in our communities, especially as libraries:

David Highton, Chair of West Ealing Neighbours says: “The library in West Ealing is not only an essential resource, it also provides a community hub right in the centre of our neighbourhood.  As a neighbourhood group we have considered the Council’s proposals and the impact they will have on our local community.  We fully accept the Council faces difficult decisions as a result of central government cuts to its funding. Nevertheless, the exact way in which the Council implements these cuts requires it to make choices. We feel it is important to note that other London councils have made different choices and have decided not to risk possible library closures. Therefore, after detailed examination of the Council’s plan we do not feel we can support the Council’s CML proposal and strongly oppose the closure of local libraries.  We would encourage all residents in the borough to stand together against cuts to our library services and to make their opinions known to our councillors.”

Members of the West Ealing Neighbours committee have attended and contributed to various consultations on library services within the borough.  At the public meeting on 29th March 2019 – attended by Carole Stewart, Asst Director of Arts, Heritage and Libraries and Cllr Jasbir Anand   cabinet member for Business and community services- many questions about the sustainability of the proposed CML model were left unanswered, especially regarding the financial burden that would be placed on any charity group taking over a library.  More details were promised in the “Invitation for Expression of Interest” paperwork which was made available to the public on 17th April 2019.

The committee met again after the release of these documents and still had concerns over the financial commitment required – any charity would be responsible for the business running costs  – utilities, insurances, maintenance, equipment contracts, lease, rent and rates (albeit at the reduced 25% charity rate).  The full financial picture was not made clear in the documents with many elements “to be determined”.  Exact costs for the West Ealing site were still unknown but these could be in the region of the £98,000 figure for ‘indicative costs’ stated in the Council’s library strategy document.

In addition to the financial considerations, further independent research revealed serious challenges faced by libraries staffed solely by volunteers.  Studies showed that other community models have fared poorly because of inadequate time and training to bring volunteers up to speed.  In all community models, sourcing and keeping the numbers of volunteers required is a constant challenge.

The volume of volunteers required to ‘replace’ the equivalent of staff jobs is much greater, as are the numbers requiring ongoing training, criminal record (DBS) checks etc.  Successful community libraries tended to be those which had full time library staff working alongside volunteers, not the model suggested by Ealing Council which has one council staff librarian visiting a community library once every 2 to 3 weeks.  The committee doubted the sustainability of the model and was concerned about the impact on the local community if it lost this valuable resource.

Members of the committee attended the public meeting on Wednesday 8th May 2019 at Ealing Town Hall jointly organised by Ealing UNISON in collaboration with the Save Ealing Libraries Campaign.  As well as considering the potential job losses these proposals would bring, the meeting heard from individuals regarding the benefits a local library offers its community.  Further information about challenges facing community libraries around the country was also given, including:

At the public meeting there was a majority vote to oppose the Council’s proposal.  There was also a sense that a campaign to save all libraries would have more impact than to champion them individually.

You can help save the libraries but urgent action is needed:

1. Spread the word – a lot of people don’t realise this is happening – talk to your contacts and social networks and let them know.

2.  Complete the consultation before May 17th – either online or pick up a copy from the library.

4.  Write to your councillors – email or letter – and keep chasing them for a reply.

5.  Keep up to date with the campaign and be active – e.g. attend the march organised for 25th May at 11am, starting at Greenford.

For more information https://ealingunison.org.uk  and click on the Libraries link.

6. Visit WEN’s blog http://www.westealingneighbours.org.uk/ where we will publish regular updates on this.

Our Councillors – the people WE vote for – will meet for the public vote on the proposal on Tuesday 16th July.  Decisions tend to be made long before the public vote so our chance to let them know what we think is NOW!

It’s still possible to make a difference and secure the future of our libraries, not just for today but for generations to come.

*  data from FOIs submitted by “Save Barnet Libraries”

** info from “Save Essex Libraries”

The residential property group, as they now call themselves, A2Dominion has bought the site 41-42 Hastings Road – Majestic Wine Warehouse and Halfords. It plans to redevelop the site to include a large proportion of affordable housing. It has a public consultation about its plans on Tuesday 21st May 3-8pm at the Jigsaw Marketing Suite on the ground floor of Sinclair House – the tall residential block next to the Drayton Court Hotel.