The plan is to demolish the old Westel/TVU mini-Centre Point lookalike building on the corner of Craven Road and the Uxbridge Road on the eastern borders of West Ealing. In its place is planned to build three new buildings – a hotel, a flats for sale block and an Affordable Rents flat block. 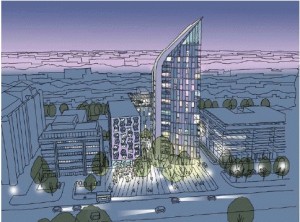 A 21 storey, 98 flats for sale, 75+ metres tall residential block will dominate the development. The shape of the new building resembles a high speed train engine turned through 90 degrees. Some will love the design and some will hate it. Next to it on the Uxbridge Road frontage will be a nine storey, 100 bed, 4 star hotel. The design of the front of it features a jagged zig zag pattern. Again the design of this will not suit everyone. There is also a small retail element on the ground floor of the flats for sale flat block. Behind all this to the north is a 33 flat Affordable Rental block. And further behind this already being built are 8 houses – and what a novelty this is.

For decades the centre of Ealing has somehow survived without any hotels at all. Next year a new Travel Lodge Hotel will open right across the road from the zig zag work of art hotel. In Bond Street a new hotel is being built and just 50 yards east of the planned zig zag hotel, work has finally started on a new Premier Inn hotel. Now we have the prospect of four substantial hotels opening over the next two years.

If Planning Permission is granted for this hotel/residential/retail development it will fly in the face of current Ealing Council Regeneration/Planning guidelines for the area, which decrees that offices should inhabit this part of Ealing centre. If you want to see the plans you can  download them from the Ealing Council website or you can inspect the hard copy plans at Perceval House. The Planning reference is PP/2010/4585. Address your comments to Maggie Perry. Comments must be received by 31 December, 2010.