I am sorry that you missed the ward Forum meeting on 22 September – it was me who put the reminder through your door as I felt that the Councillors should be able to update everyone on the current situation. The reasons for the current meltdown are several:

As you will know, earlier this year the Council undertook 2 separate neighbourhood consultations on this matter. The first was for an extension of the nearby Controlled Parking Zone (CPZ) to cover Felix, Endlseigh and Eccleston Roads. Neighbours voted 61% in favour of the extension and work was due to start in August 2011. In August the Council then commenced a statutory consultation before commencing work during which they received a number of objections from residents in Eccleston Road including a 31 name petition that has now been forwarded to the Council’s legal department for reply. As a result, the Council have put a hold on the CPZ extension until the matter can be resolved. 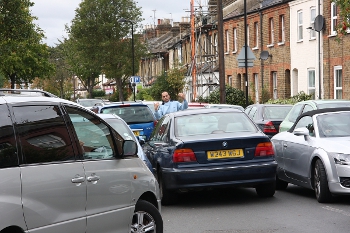 The second neighbourhood consultation that took place this year was called the “Neighbourhood Improvement” (TFL) scheme which was also approved my a majority of 58%. In August the council went ahead with this scheme, part of which entailed the introduction of additional yellow lines at the east end of Felix Road adjacent to St John’s School. This resulted in the loss of up to 10 parking spaces at this end of the road who have now been forced to move further along Felix Road to find a space. This so called “Improvement” Scheme has also meant that the traffic jams outside Glenpark Court have now been pushed further down towards the corner shop and into the Romsey & Endsleigh Road area. Last Saturday this part of the road road was jammed up for significant parts of the day and several drivers had to abandon their cars to direct traffic. The “neighbourhood improvement” scheme also approved a ban on vehicles in excess of 7.5T entering our streets but, unfortunately the Council only erected one sign in Eccleston Road and have ignored the other entrance to the rat-run in Alexandria Road. The traffic flow situation is quite desperate and at certain times prohibits any access to emergency vehicles.

Earlier this year the Council received a number of written requests from concerned neighbours pointing out that the two schemes (both the “Neighbourhood Improvement” scheme and the “ CPZ Extension” scheme) were reliant on each other and that to introduce the “Neighbourhood Improvement” scheme in isolation would vey much worsen an already bad situation. This matter had previously been discussed at an earlier Ward Forum Meeting although the Council failed to take notice and allowed the additional yellow lines to be added.

At the Ward Forum meeting on 22 September there was a lively debate during which the Councillors explained the delays to the CPZ scheme. It soon became apparent that none of the Councillors had actually visited the area recently and were under the apprehension that the “Neighbourhood Improvement” scheme had already been implemented in full to include a new crossing outside St.Johns School. The councillors went on to explain that nothing could be done to alleviate the situation until their legal department had had an opportunity to reply to residents in Eccleston Road. One resident suggest that the reason that so many people in Eccleston Road were upset about the CPZ extension proposals was because may of them already parked in their front gardens and did not want the designated CPZ lines to be painted in front of their houses. This issue effects those at the southern end of Eccleston more than those at the the northern end of the road where it joins Felix Road – this is because many of those at the top end of the road do not have available parking in their gardens. One resident expressed great concern about the situation on Fridays when many additional people arrived in the area to worship at the local mosque. The Councillors said that they were unaware that no 7.5T weight limit sign had been erected in Alexandria Road but undertook to investigate. At the meeting I expressed my personal view that both the Council and the elected Councillors had failed residents which was met by an emotional outburst from one of the Councillors. As you will know the matter of the CPZ in our road has now been discussed for more than 6 years during which time there have been 4 neighbourhood consultations. The Councillors further stated that they were unwilling to recommend that the CPZ extension should be implemented without the inclusion of Eccleston Road.

Since the meeting on 22 September 2011 the situation has worsened even more! This is due to 2 issues:

a) The Housing Association who looks after Glenpark Court at the eastern end of Felix Road have now advised their tenants that they will in future impose a parking charge of £49.17 per calendar month for any tenant wishing to park in the gated are under the flats. The effect of this is likely to increase demand for street parking spaces by a further 10 vehicles. The Housing Association have also stated that they will sell off vacant spaces to outsiders at £ 650.00 pa

b) GML has now introduced private parking management across the whole estate through Parking Management Ltd. All residents who wish to park on the estate must now apply for designated permits and they have erected a number of signs displaying penalty charges for anyone who ignores the new ruling. This has resulted in a final devastating blow for residents of Felix & Endlseigh Roads as many many more vehicles have now been forced into our narrow streets. It is yet unclear who has instigated the new parking restrictions on the estate but I suspect it has been arranged through the GML property management company A2 Dominion in conjunction the contractors Rydon. Some of the motivation for this has been driven by the predicted rise in parking requirements by GML estate building contractors. Once again this is a matter that was known about by the ward Councillors for many months but no action was taken.

I, along with one of my neighbours, have now raised a formal complaint to the Council about how these matters have progressed but so far we have received no formal reply. I have also urged our Councillors to help us and, if nothing else happens to include the matter back on the next Ward Forum agenda scheduled for 23 February 2012. In the meantime I can only suggest that you also lodge a formal complaint to Ealing Council either with or without the help of the elected Councillors.

Like you, I am extremely distressed about this situation having lived in Felix Road for 20 years. To make matter worse my car was again dented on the front wing last week causing an estimated repair bill of another £350.00. I am now retired and my family and I have temporarily stopped using the car for fear of not finding a parking space on our return. We are very distressed about the situation and now feel almost housebound. I guess the only other thing we could do is to ask the Council for an urgent public meeting to discuss the issue.