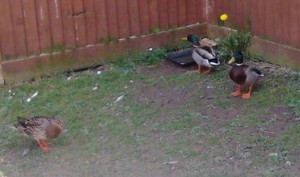 It’s very odd but at least once a year I see, what look to me, to be the same three ducks mooching around the same part of West Ealing.  There are always two male and one female mallards and they always come to the same area along Leeland Terrace. They’ll wander round for a few hours and then fly off. It looks like someone’s put some water out for them this time. Sometimes I’ve seen them around by St James Church and other times where I saw them yesterday by the park bench on the corner of Leeland Terrace and Melbourne Ave. There must surely be a reason for them to keep returning but I’ve no idea what it is? Anyone else any ideas?