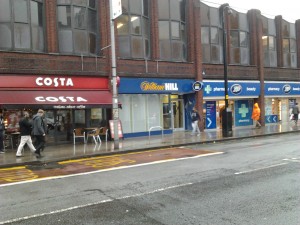 The new Willam Hill betting shop due to open soon

It’s rarely that a sense of despair takes over but that’s my feeling when I read this week that in a letter passed to the Guardian,  ‘Ministers have privately assured Britain’s biggest bookmaker that attempts by councils to block the spread of betting shops would be frustrated by the coalition’s controversial planning changes, despite claiming in public that the measures were intended to revitalise high streets.’ The letter was written by planning minister Nick Boles to the betting chain Ladbrokes which had said that “some councils are now placing whatever obstacles they can in the way of our ability to obtain planning permission” for betting shops and attacked “alarming actions by unelected officials”.

In response, the Nick Boles wrote back to Ladbrokes saying: “I do recognise that this can be a significant problem and we are taking action to tackle it.” The letter cites new powers contained in a controversial “pro-growth” bill, which became law in summer.

Putting aside the very serious questions about the addictive nature of the Fixed Odds Betting Terminals which are now in nearly all betting shops, this approach to planning by government is surely wholly at odds with their localism agenda. How can this government’s support of localism, witnessed here in the West Ealing Centre Neighbourhood Forum, sit alongside a central government which overrules any say locals might want in how their high streets develop and, in particular, whether or not we as residents want yet more betting shops in our high streets? The two are wholly incompatible.