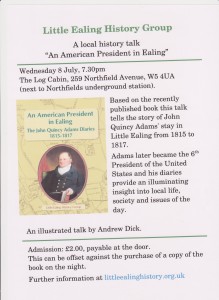 I’ve read the recently published book which tells the story of John Quincy Adams’ stay in Ealing as US representative to Great Britain before he became the 6th President of the United States.  For two years, 1815-1817 he lived at Little Boston House just across from Boston House. The book is based on his detailed diaries and gives a facsinating insight in to life and society in Ealing. He was a great walker and he visited the Ealing Races at Ealing Dean (including what is now Dean Gardens) which was well known for pony and donkey racing – leading to its nickname of ‘Jackass Common’.  This talk on Wednesday 8th July at The Log Cabin near Northfields station should be worth the £2 admission fee.