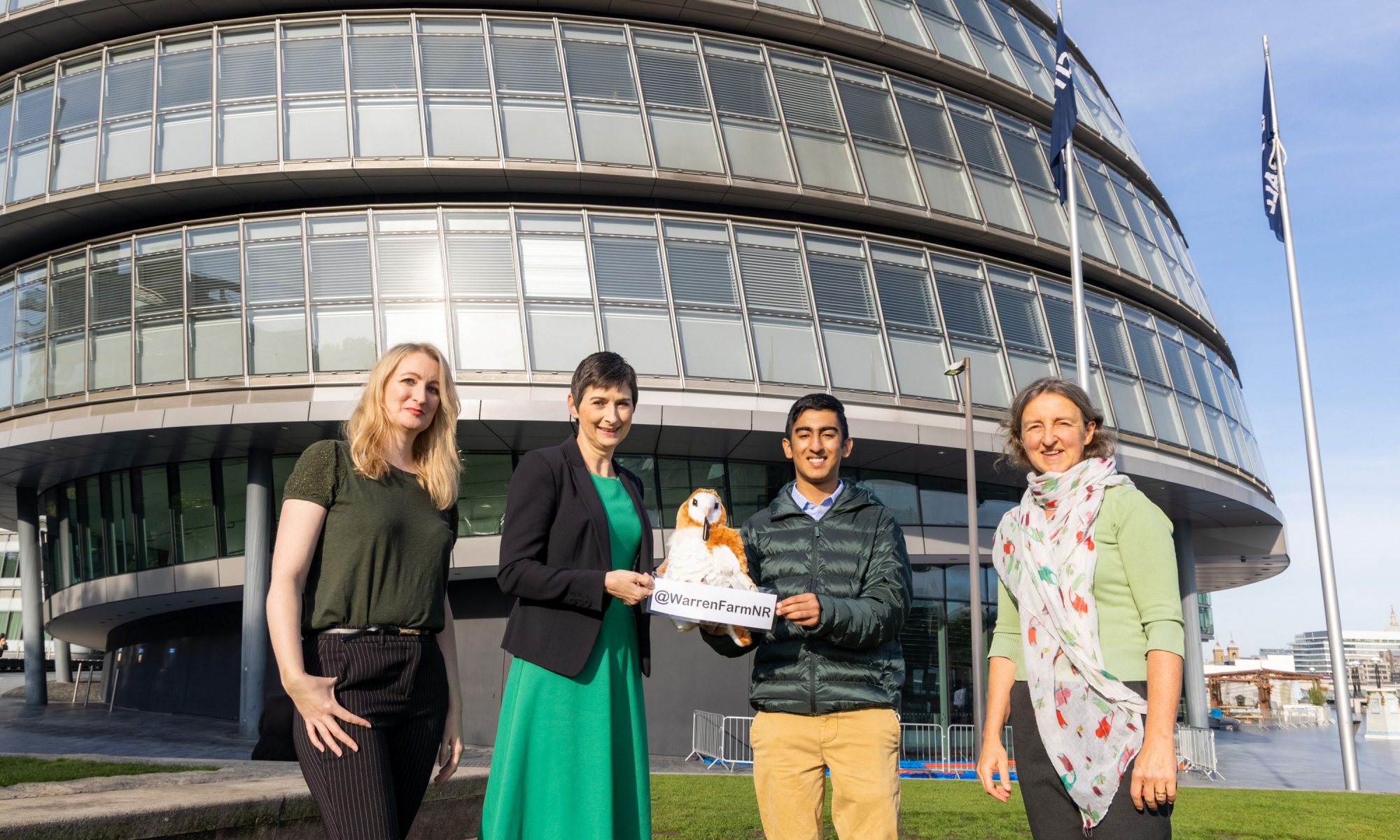 Press release from the campaigners:

The plan to designate Warren Farm and its surrounding meadows by the River Brent as a statutory LNR has been put forward by the Brent River & Canal Society (BRCS), a charity which campaigned successfully to create the Brent River Park (BRP) in the 1970s. Since Ealing Council stopped using Warren Farm as a sports facility, the meadows have rewilded and now form a unique urban grassland. Species of birds, mammals, plants, reptiles, amphibians and insects which are rare in London have been recorded thriving on the land. This proposal would preserve the meadows for future generations and ensure the protection of its rare and endangered species such as the Skylark, a red-listed bird facing UK extinction.

The petition was presented by BRCS Trustee Katie Boyles, young conservationist and wildlife writer Kabir Kaul and CPRE London’s Head of Green Space Campaigns, Alice Roberts. Campaigners are asking the Mayor and the London Assembly to support the granting of LNR status to Warren Farm, as part of the CPRE’s Ten New Parks for London campaign. Not wishing to use paper unnecessarily, the campaigners presented the petition on a memory stick, held in the beak of a model barn owl. The barn owl is one of the endangered species found on Warren Farm and the Barn Owl Trust is supporting the nature reserve campaign.

Alice Roberts stressed the importance of areas like Warren Farm for London’s green space and biodiversity:

“London has just half the green space it needs for a population its size. Yet there are many green spaces in the capital which, if properly managed, could be used as public amenities while, at the same time, increasing London’s biodiversity. One such is Warren Farm, a large area of abandoned former playing fields and land in Ealing. It was at risk of being given away but now, in cooperation with the local charity the Brent River & Canal Society, CPRE London is asking for the Mayor’s support to give this unique rewilded space Local Nature Reserve status. We have named Warren Farm as one of our Ten New Parks for London and hope that the Mayor will help us to ensure it is preserved for future generations.”

“We are absolutely delighted to have achieved over 10,600 signatures on our petition. Lockdown has opened people’s eyes to the importance of local nature and it is clear from the huge level of support we are receiving that residents want to see green spaces like Warren Farm protected.

“We simply cannot afford to lose this vast wildflower meadow habitat of which there are less than 2% remaining in the UK. The biodiversity loss would be catastrophic for London. We have red-listed birds, insects and plant species recorded here that are facing UK extinction. We are in conversation with Ealing Council Leader, Peter Mason, and now we are asking for support from the Mayor and Assembly to make this happen. We want Warren Farm Nature Reserve to set a precedent for what can be achieved.”

Kabir Kaul, the young conservationist and wildlife writer who came up with the idea for the campaign, said:

“It has been wonderful to be part of this campaign and I have learned so much about this precious green space in the heart of Ealing as a result. This magnificent grassland habitat is home to several rare and red-listed species, including Skylarks: it brings me, and many others, great joy to hear their song in the borough. The meadow also benefits many other bird species, including Mistle Thrushes, Red Kites, Rooks, Buzzards, and in September, a migratory Wryneck visited. If Warren Farm and the surrounding Brent River Park Meadows receive the designation of a Local Nature Reserve, it will ensure that the site’s important biodiversity can be protected, and encourage more residents to enjoy it for years to come.”

Caroline Pidgeon will pass the petition to the Mayor and table a written question calling for his support at the October meeting.