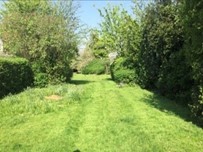 We featured the earlier campaign in Hanwell to save the Arts & Crafts house in Church Road. This campaign was successful. There is now a threat to overdevelop the property’s rear garden with considerable loss of green space and the danger of setting a precedent in a conservation area. This is the information we have received about this new campaign:

THANK YOU very much to the residents who raised 400 objections which stopped a planning application to demolish a 1912 Arts & Crafts house at 178 Church Road, Hanwell W7 3BP to build six flats and two houses in a conservation area.  Objectors included James Murray, MP for Ealing North, Ward Councillors, numerous individuals and groups.  A new application has been filed by the developers Luxegrove Homes and the battle is now on to prevent the rear garden from being replaced with:

Could you PLEASE object to this new planning application to prevent:

The saved Arts & Crafts house facing the road, will be turned into two flats with a rear extension, roof terrace and green roof to house 7 people.  A mix of flats and housing is a gross over development with an odd layout, poorly designed houses and a lack of privacy for the 21 proposed residents and neighbours.

Please go to: https:///pam.ealing.gov.uk/online-applications/ and search for 216269FUL.  You can view the ‘Documents’ tab and object on the ‘Comments’ tab.  The deadline is Wednesday 8 DECEMBER 2021.

Contact jeanetteanngrose@yahoo.co.uk for any queries. Thank you – your help is really appreciated!