After the prayer meeting on Ealing Green we had an early dinner in Carluccio’s.  I booked a table knowing my son would be most upset if it was too busy.  For the first time in the 7 years I have lived in Ealing the place was practically empty. And remained so until we left around 8.30pm.  Walking back to West Ealing along Mattock Lane we stopped off to look at the preparations for the   Shri Kanagathurkkai Amman Temple chariot festival tomorrow.  We then carried on along the Uxbridge Road home – West Ealing was like a ghost town, incredibly depressing to see.

Let’s please support Ealing and the local traders however we can, they need us more than ever.

1. There’s a vigil tonight at 6pm on Ealing Green organised by Ealing Churches

2. Healing service at St James’s (back of Sainsbury’s) West Ealing Sunday (Aug 14, tomorrow) at 10.30. Come whatever your beliefs or religion to show solidarity with West Ealing community. 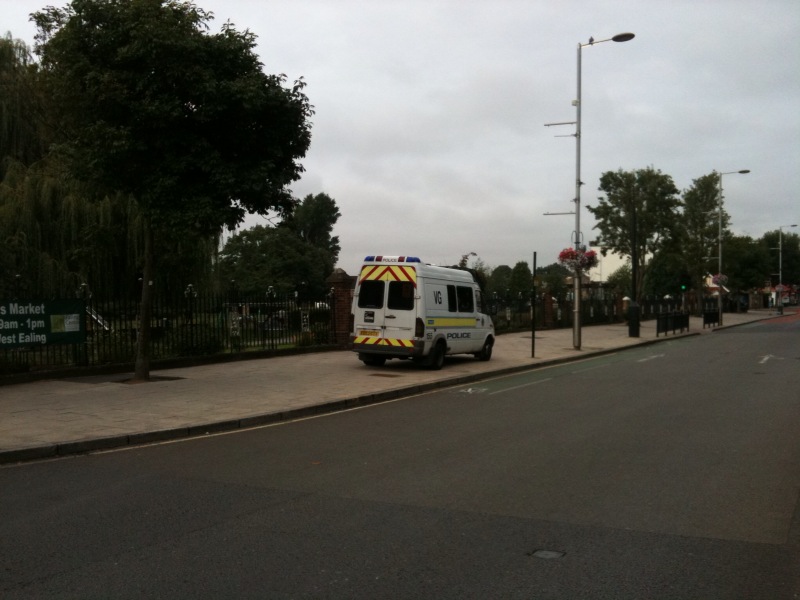 On my way home from work last night and on my way to work this morning I have seen a strong Police presence along West Ealing Broadway and funnily enough hardly any drinkers.. 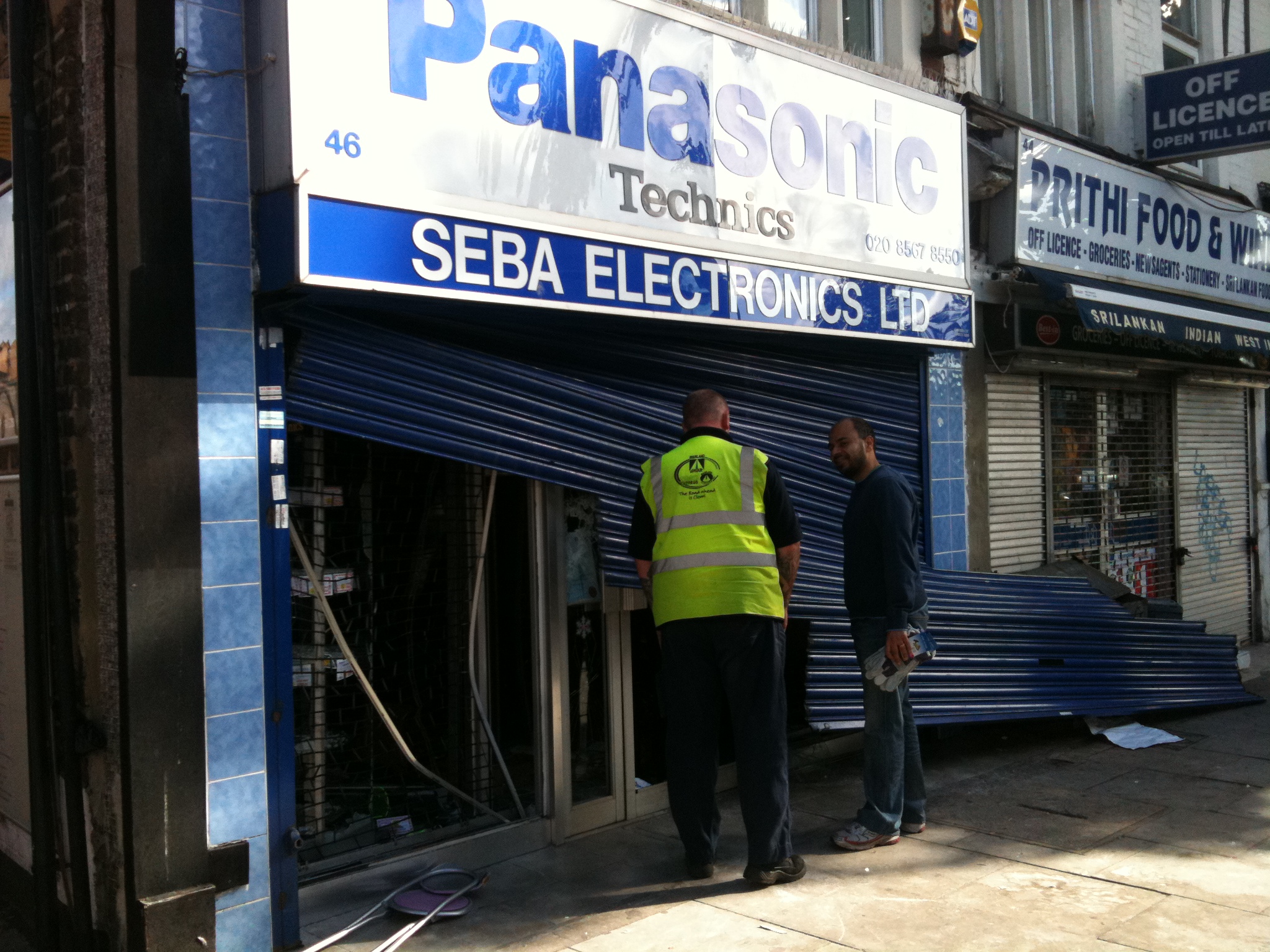 Walking along West Ealing Broadway this afternoon at the closed, boarded up shops I wonder if they will ever re-open?

Seba Electronics is a small family run business trading in the area for some 40 years; all their stock stolen in one night.  Goldmine is the same. And whilst Blockbuster is no small independent it has a role to play on the corner of St James Avenue, an area well known to the Police for drug dealing. With Blockbuster on one corner and Farah now on the other this area was looking partially revitalised. There are also plans in place for a monthly craft market here starting in the Autumn, specifically placed in St James to help with this problem.

On a brighter note I went into Luckhurts and bought some fine quality meat at great prices – support your local traders in these difficult times. 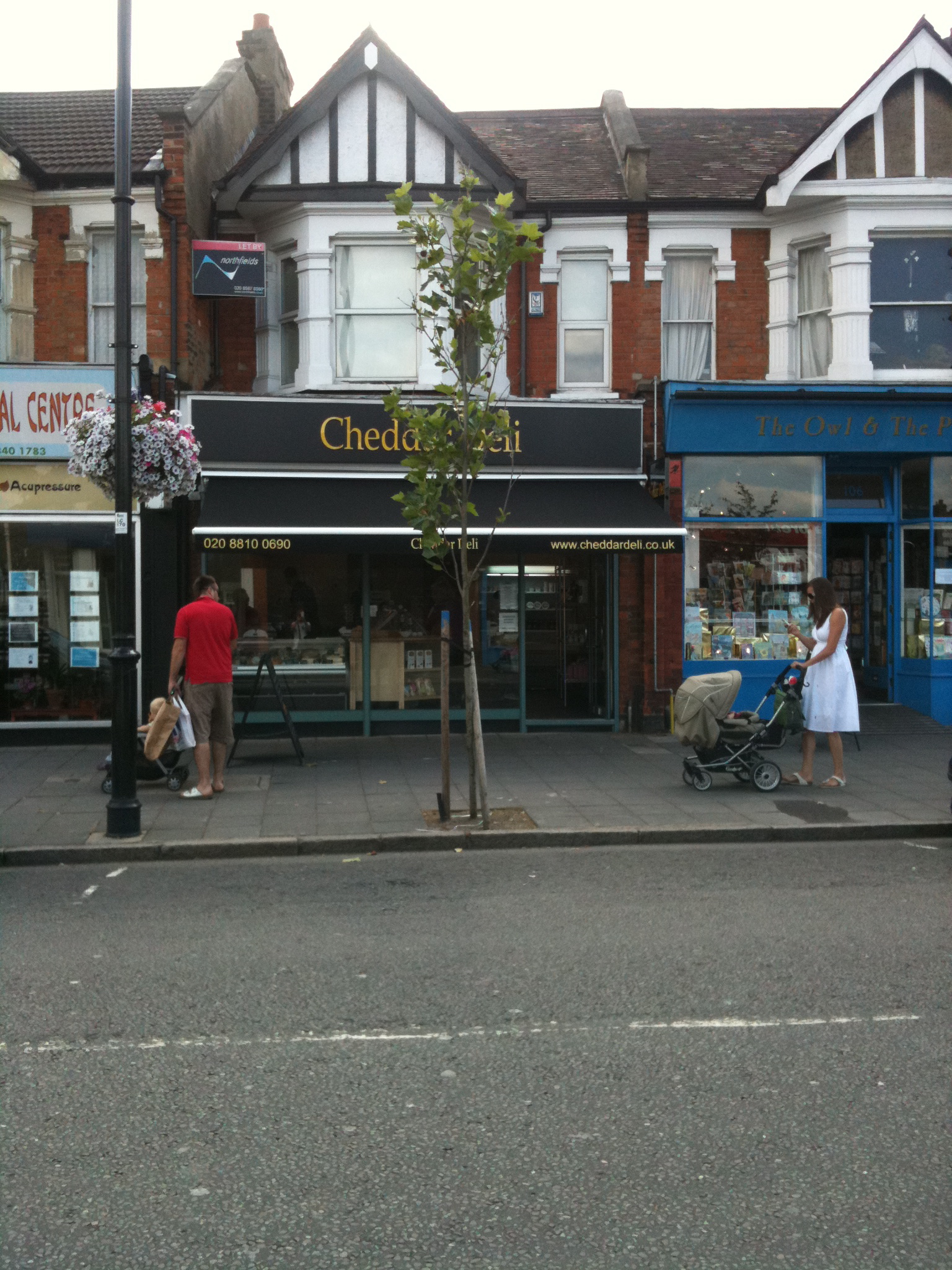 Amongst the mayhem and chaos in West Ealing over the past few days a new cheese shop has opened on Northfields Avenue.  A local husband and wife team opened Cheddar Deli on Monday 8th August and seem to be doing a brisk trade.  I went in yesterday and bought some manchego, jarslberg and quince cheese. Brent (the owner) was very helpful and let me taste the jarslberg as I wasn’t familiar with the flavour. My lunch today was delicious – I’ll certainly be going back for more.

They also offer a monthly, quarterly, twice yearly service. I’m not sure if this is delivered so best to go in and ask.

Apart from cheese they sell meats, home made tarts and a small range of top quality produce such as crackers, oil, jam.

This post on Money Saving Expert implies that insurance will cover people who have have suffered damage – traders or individuals, house or car. Uninsured may qualify for crisis loans or other compensation. But you might need to move fast…http://www.moneysavingexpert.com/news/insurance/2011/08/london-and-uk-riots-the-financial-help-available 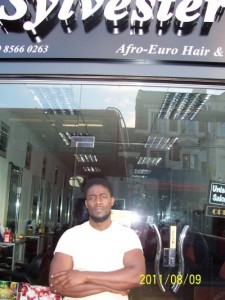 Plainly we need a miracle. One man stood in West Ealing Broadway all night and witnessed what happened. He described a scene of random violence and looting. Police cars sped through, presumably too outnumbered to dare to stop, as 2-300 young people, masked and hooded, went on a frenzied spree hurling paving stones into shop windows. The shop that sells fancy trainers was the first to go. Blockbusters was smashed open and emptied; Play Stations walked out and became currency on the street. Seba Electronics was emptied – one of the few remaining independent electronics shops owned by a gentle man who writes inspiring sayings on the wall outside. What will he do now? The Bargain Store – rugs, mobile phones, luggage – was broken into. Cash Converters put up a brave label, saying they’d be back.

The man who bore witness, Mike Sylvester, who runs Sylvester’s Hair and Beauty, just stood outside his plate glass window all night – and he’s planning to do the same tonight. ‘Weren’t you frightened?’ I asked him. ‘Not really,’ he said. ‘I just kept saying “don’t set fires”. You have to be careful. One young guy tried to stop them trashing Blockbusters and his face ended up covered in blood.’  Mike worries that young people are simply very angry and don’t care what they do.

Mike, and people like him, are a ray of light. One person said that Southall shops remained safe because the families that own them came out in force to stand guard.

We asked the people at the Bargain Store what help they needed, as they rushed to board up their shop – still wide open to the world at 7pm. They said it was enough we thought about them. We asked the Afghani veg and fruit shop, as they brought down the shutters early, what we could do for them. They said prayer was the only answer and gave us free bananas to thank us. All we could do was walk and talk. Mike said that things like Family Day on 24 September (a ‘new’ West Ealing tradition that started last year) are more crucial than ever. Meanwhile, he’s performing his vigil tonight again. I can’t help feeling it would have been worse last night without him standing there, an almost silent witness – a symbol of patient sanity, of adulthood.  I hope he stays safe. I wish I was brave enough to take him a cup of tea.

All we keep asking is ‘What can we do?’ 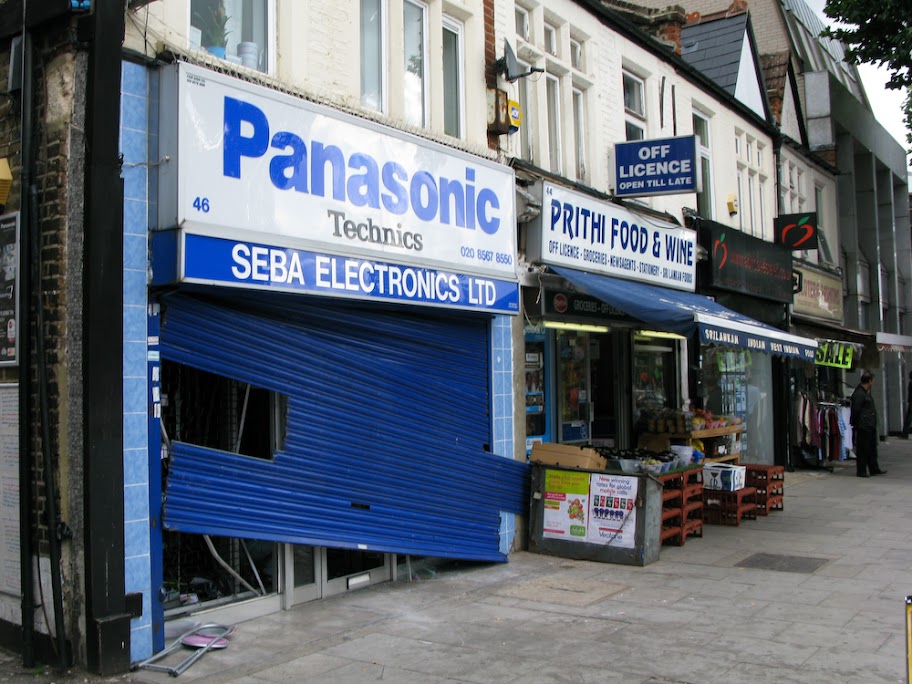 I agree about having a public meeting.

I can’t relax either.

I can’t compare this to anything that has happened in the whole of my life.

Surely troops will have to be deployed soon if this is repeated later today.

I guess the bankers will still get their £million bonuses.

There is a police presence now, so that is good. People are still making their way past them.  Some of them caught buses and carried their goods away with them.   The problem with this situation is that I don’t know what’s happening just a few buildings down the road so can’t relax and go to bed. Can we have a public meeting in support of the local people? It is all right for some for the youth to be angry, yet what about people like us? How do we get to express our anger?

Talking about Ealing on the news now.

Tesco Express is (or was) on the north east corner of Haven Green.

Sad to say I’ve been predicting rots in the streets for a while but in my wildest dreams I never expected this.

Take care  – you are much nearer to this than I am. I spoke to my son near you to stay indoors.

Hi, Eric. Are you awake and following what’s going on on the high street? Several hours ago bunches of police cars were flying past, mainly towards the east. But once the hordes started coming down the roads carrying their goods from Blockbuster etc and since – a couple of hours now, I don’t know if there is a police presence in West Ealing or not. Now the Panasonic shop has been ransacked. There still seem to be young guys turning up in the side streets, covering their faces and then heading onto the main street or easy pickings. I would just like to know if there are any police in West Ealing. I haven’t bothered phoning anyone because what’s the use. Just keeping a lookout for break-ins and fires nearby.
Tesco Express Ealing Broaway gone. Where’s that? Think I saw some of the kids carrying bottles past mine. ONLY 5 POLICE ON SCENE IN EALING!!!!

Woken up by my 5 year old son at 3.00am this morning saying ”Mummy there are helicopters everywhere” the reality hit me that the rioting had come to the ‘Queen of the Suburbs’. I held my son in my arms with my heart beating fast genuinely scared at the thuggery and wanton organised violence that has now spread to West London.