On Tuesday 6 December 2011 some 50 people attended a public meeting to discuss Ealing Council’s proposals to make the Lido Junction safe for pedestrians – for the first time in living memory. West Ealing Neighbours (WEN) organised the meeting and it was WEN (along with Five Roads and Kingsdown Residents’ groups) who researched and published its findings and recommendations on the junction in 2009. This report in fact stimulated the Council and Transport (TfL) for London into action.

We are in the middle of a public consultation on the proposals and Councillor Mahfouz, the Council’s Transport Czar, answered questions posed by the audience on the proposals.

The majority view was that pedestrian safety was the number one priority followed by minimal impact on traffic throughput. Residents welcomed the proposed installation of signalised pedestrian crossing on all four arms of the junction. The all traffic lights at red and all pedestrian lights on green will mean that pedestrians can cross any of the four roads and cross diagonally all at the same time. Some residents were however disappointed that there were no plans for diagonal signalised pedestrian lights and no arrow head markings on the road to indicate and encourage safe diagonal pedestrian crossings. 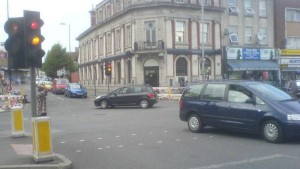 Some people wanted the Waitrose junction traffic lights to be removed and replaced with a roundabout (which is what existed there prior to the traffic lights). Councillor Mahfouz explained that the Council had run a computer model of traffic performance if a roundabout were to be installed and the model indicated that traffic congestion would get worse. However, he explained that an expert system would be installed at that junction which would monitor traffic flows and modify red/green light times to suit the traffic profile (eg the lightest traffic flow at that junction is into and out of Hastings Road – so the system would cut down the green light phase accordingly).

Complaints were also made about the Pelican crossing immediately south of the junction on Northfield Avenue. The pedestrian signalling took so long to come into operation that pedestrians who had initiated the pedestrian crossing had often already crossed the road before the green pedestrian lights came on. So, when the red traffic lights came on there were no pedestrians in sight and motorists just sat there immobile for no good reason.

Some people wanted both bus stops on Drayton Green Road to be removed completely. Councillors pointed out that Ealing Council had no power to do this and that such actions were the domain of London Buses (TfL).

There was general agreement about moving the bus stop for north running E7s/E11s further north along Drayton Green Road and further away from the Lido Junction. This will minimise the length of queues behind the bus when it stops and minimise congestion at the junction when an E7 and E11 arrive together.

WEN pointed out that the public consultation was flawed. Question 3. asks:

‘Are you in favour of the proposed changes to parking, loading and bus stop arrangements along Drayton Green Road?’

If one answers ‘No’ then logically the parking on the east side of Drayton Green Road will remain.

If one answers ‘Yes’ then the loading bay and the five parking bays are introduced.

So whichever way you vote parking will still obstruct traffic flows on Drayton Green Road – which is clearly what most people don’t want.

WEN recommended that in the ‘Comments’ section respondents should state: