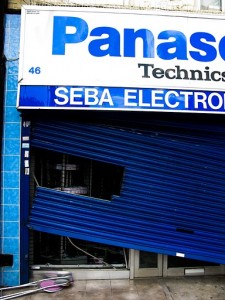 I attended a meeting of local traders last night at St James Church called by the Council to help those traders affected by recent the looting and destruction. It was well organised, well thought through and well attended not just by West Ealing traders but also by traders from South Ealing.

Council leader Julian Bell introduced the meeting and said over £100,000 had been paid out so far in the £1200 grants to affected shops and businesses across Ealing. He also talked about West Ealing being somewhat overlooked in the reporting of the looting and damage of that night. He gave a powerful description of the CCTV images of the determination of the looters to break into Seba Electronics and other shuttered premises. He said he has also asked the Borough Commander that the large screen just put up in Ealing Broadway displaying images of the rioters to help identify them be moved to West Ealing when possible.

The heart of the meeting was a mixture of Council staff and independent advisors talking about some of the key isues of concern to traders. Aileen Jones , Head of Planning Services, looked at any planning issues that might arise from traders changing their shop fronts to put in new shutters (Council leader Julian Bell said think about toughened glass – Sainsbury’s in West Ealing survived because the looters couldn’t break through its toughened glass front windows). There was useful information from an insurance expert on claims made under the Riot Damages Act of 1886 under which the Metropolitan Police may be liable to pay some of the costs involved. This one is a bit tricky because the Act is old and simply talks of loss and it’s not clear if that is just physical loss of goods and property but also loss of trading income if a shop has to shut for repairs etc.

Paul Dunn of the Community Safety team gave a very good overview of their work going round talking to the local traders and residents affected. He told of some residents of the sheltered accommodation just off the high street packing their suitcases for fear of having to be evacuated if the shops were set alight. His talk gave a very moving insight in to just how far the impact of the looting and destruction reached in to our community and what he and his team have been doing to alleviate people’s concerns and come to terms with what happened that night.

The final presentation was by Michael Sylvester, chair of the West Ealing traders group (WEB) and myself as chair of West Ealing Neighbours. Michael urged all the West Ealing traders to come to the next WEB meeting on Monday 5th September 6.30pm at St James Church. By working together local traders can have a more powerful voice and be more effective in working with the Council right across a range of important matters. I followed Michael and gave a brief run down of the plans for West Ealing Family Day on Saturday 24th September and how WEN will do all it can to encourage its members and all other residents to shop locally.