I thought I saw signs of action yesterday at the old Blockbusters on the corner of the Uxbridge Road and St James Avenue. Then this morning I had another look and ,yes, work is underway to turn it in to a Morrisons. They are clearing out the store in readiness for the new fit out. I had a word with a man with a Morrisons hi-vis jacket and he wasn’t sure of the exact schedule but thought it would take about 10 – 12 weeks or so to complete. 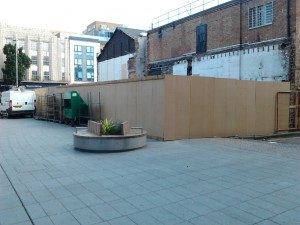 Another occasional update  on the new hotel in West Ealing – nothing’s happening. Having cracked on with the demolition it’s all been quiet for the last 10 days or so. I hope plans are still on schedule as I’m looking forward to Tony Luckhurst’s return in good time for Christmas.

I’m a big fan of the efforts being made to show just how crucial Ealing was in the birth of British Rhythm and Blues and I’ve taken my first dip in to crowdfunding with this film.  The target is to raise £6,000 by August 25th and as of writing this we’ve raised £963, so pretty good going as it’s only just been launched. Suburban Steps to Rockland is a documentary feature film focusing on the the story of the Ealing Club, a small venue in West London, where bands and artists like The Who, The Rolling Stones, Ginger Baker, Jack Bruce, Eric Clapton – just to name a few – started their careers in the early ’60s.

Your chance to support the film and get rewarded for participation

Supporters will receive copies of the completed film, access to exclusive merchandise and LIVE EVENTS being planned (please see Kickstarter for details) 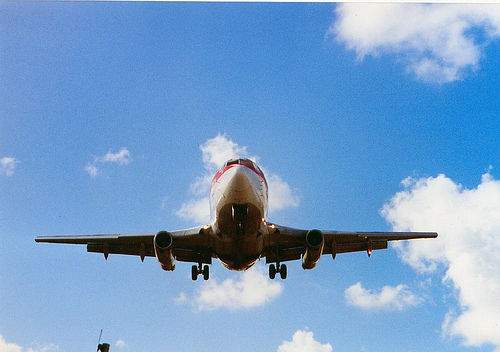 Heathrow has been in the news a lot recently proposing a third and possibly fourth new runway. The proposals are being considered as part of the Davies Commission set up by the Government to examine whether and where additional airport capacity is needed in the UK .

Heathrow has outlined three potential sites for runways to the north, northwest and southwest of existing operations. If the go ahead is given:

– the number of Heathrow flights, currently capped at 480,000 a year, will rise to about 750,000 with a third runway and about 1million with a fourth

What does this mean for West Ealing ?

The proposals are sketchy. Flight paths are not yet known in detail but, given the potential doubling of flights, it is questionable to say the least to suggest (as Heathrow does) that the noise climate will improve. Their calculations are based on a highly contentious method of measuring noise which does not take into account the frequency of planes overhead.

Heathrow’s proposals to transport the millions more passengers to and from the airport are also thin on detail and fail to acknowledge the current infrastructure is creaking under existing passenger numbers. Crossrail is a key component of their plans so don’t bank on that fast service to central London, you might not be able to fit on the trains by the time they get to West Ealing .

What can you do if you oppose these plans?

– Write to the Davies Commission copied to your MP urging them not to opt for expansion at Heathrow. It is always good to describe how you personally have been affected by aircraft noise. 725,000 people already live under Heathrow flight paths, this is 28% of all people disturbed by aircraft noise across Europe . Building a new runway at Heathrow will exacerbate existing problems of noise, congestion and pollution. The Aviation Environment Federation in its submission to the Davies Commission described how forecasts of passenger demand have been too high since 2000 and the case for additional runways needs to be balanced against other factors such as noise disturbance, pollution etc.

– If you have been disturbed by noise, it is important that you contact Heathrow with the details of the date and time of the incident. The number of complaints they receive about noise is one of their key performance indicators. http://www.heathrowairport.com/noise/help/make-an-enquiry

Heathrow’s proposals to the Davies Commission: A new approach

HACAN actively campaigns against the expansion of Heathrow and the reduction of aircraft noise. The website contains many useful documents including its latest briefing on Heathrow and Noise the latest on noise

What to look out for next

A consultation on night flights is due to take place in Autumn. We need to urge the Government to stop all flights after 11pm (the last take-off from Heathrow is scheduled for 10.45pm but you wouldn’t guess that from the number of flights flying over West Ealing up to and beyond 11.30pm) and before 6am.

I know there can often be problems with back alleys being used by burglars or just being used as a dumping ground for rubbish so I thought I’d pass on the details of the Council’s alley-gating scheme. In an advert in today’s Gazette it says that residents can apply to have alleys gated by the Council. Applications can be made from 1st to 30th August and you contact the safer communites team on 020 8825 7757 or email them at gating@ealing.gov.uk

The West Ealing Hub Working Group has conducted a study to assess the feasibility of a coworking space in West Ealing over a three month period from April to July 2013. The study is now complete! Over 250 people input their ideas and comments to inform the final study. We would like to say thank you to everyone who has contributed.

Our research has shown that there is awareness in West Ealing that the area is changing. The hub idea was received with great enthusiasm, and many local people indicated that they would like to take an active part in developing an inspiring business coworking space on the high street.

We looked at various business models of coworking spaces and hubs all over London to find a model that would work best for West Ealing. The feasibility study found that there was a case to be made and a solid foundation to take forward the future enterprise.

A new operational group chaired by David Highton will be looking further into developing the right business model.

A Facebook group has been launched  for parents and carers of children with disabilities in Ealing and West London to share information and experiences. You can join at http://www.facebook.com/groups/ealinghelp/ 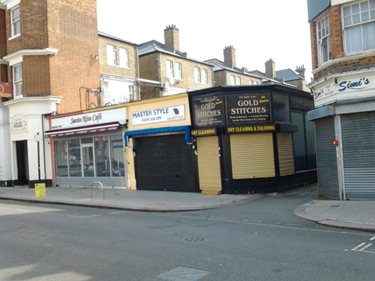 The Santa Rita café in Leeland Road has been closed for a while and rumour has it that this site is to be redeveloped and flats built above. Then I noticed yesterday that the hairdressers next door was shut. A bit of a blow as that’s where I get what’s left of my hair cut!  Maybe he’s on holiday but there wasn’t a sign on the door. Anyway, not necessarily a bad thing to redvelop this little site but with local house prices climbing ever higher, partly driven by Crossrail, there is likely to be more and more of these infill-type developments.
Tweet

Help needed with our markets

We need some ideas, energy and enthusiasm to help us develop both our monthly craft markets and our annual arts and crafts fair.

We want to restart our monthly craft market in St James Ave again soon. We learnt a lot from our first year and we now want to take it to the next level.  I think we will be helped when the new Morrisons opens in Blockbusters as this is almost certain to bring many more people to St James Ave.

We’re looking for volunteers interested in any of the following:
•Choosing the stalls for each market
•Managing the booking and admin
•Helping manage the market on the first Saturday of each month 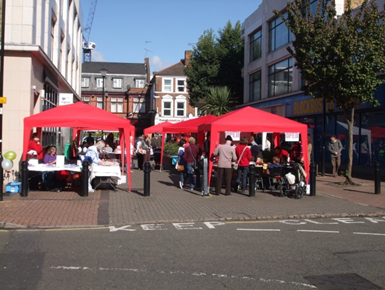 The monthly craft market in St James Avenue
On top of the monthly craft market, we need a number of volunteers to help with the annual arts and crafts fair each November in St James Church. Martyn has put on some 12 of these annual events and feels now is a good time for a change – so many thanks to Martyn for establishing the arts and crafts fair as a much-anticipated annual event.
The areas of interest are similar to the monthly market:
•Choosing the stalls
•Managing the bookings and admin
•Organising the lay out of the market in St James Church
•Helping run the event on the day
•Managing the volunteers who help set up and clean up
Both these events are fun to be involved and offer a great opportunity to be at the heart of what’s happening in West Ealing.
If you’re interested in helping please email us at westealingneighbours@gmail.com
Tweet

CENF was designated by Government in March 2013 to create a Neighbourhood Plan for the Central Ealing Business Neighbourhood Area. A 12 person Management Committee will be elected at this meeting.

Crossrail will also be represented at the meeting and hopefully more details will be revealed and discussed concerning the rebuilding of Ealing Broadway Station.

Tell the forum what you want for the future of central Ealing and find out more about the forum at www.centralealingforum.com.